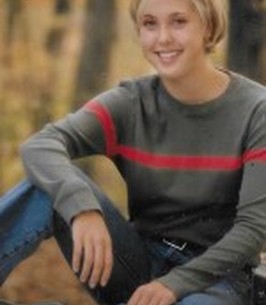 January 25, 1983 - January 31, 2022 Service Date: February 12, 2022 A Service of Remembrance and celebration of Megan's life will be held on Saturday, February 12, 2022, at 12:00 p.m. at the Alfred Parish Church, 12 Kennebunk Road, Alfred, ME. Immediately following the service, you are welcome to a reception held at The Bistro in the village. Masks and social distancing will be in place. Megan left us last night, January 31, 2022, while she was holding her dad’s hand. She was at peace and in the comforting care at Gosnell Hospice House in Scarborough. Megan W. Rand was born in Boston, Massachusetts on January 25, 1983. The child of Albert B. and Nancy A. (Willard) Rand, Megan was part of a blended family which included her brother, Albert Jr. of Colorado. Her early years were full of medical miracles as she survived against all odds with the devotion of mom Nancy and dad Al as a healer. Megan lived in Norwell, Mass till 1994, then Tennessee till 2005, and then the Boston Area. She stared figure skating at the age of five in the I.S.I.A. (Ice Skating Institute of America, 25,000 Members) and competed on Cape Cod and around Boston. In Tennessee she studied ice skating under Robert Unger, a founder of I.S.I.A., He won a Men’s Olympic Ice-Skating Gold Medal in the 1950’s. Megan advanced to freestyle six and competed in Nashville, St. Louis, Huntsville, and Framingham. She went on to teach the Nashville Predators Hockey Team while at Vanderbilt University. While attending Seymour High School in Tennessee, she started the girls’ soccer team, joined the rock-climbing club (Repelling off the local water tower at night!) and graduated Class Valedictorian. Megan became the first ever Seymour High School student to be accepted at Vanderbilt University in Nashville. Special memories were shared during the holidays in Tennessee, with walks in the Smokies and family picnics. During her studies at Vanderbilt University, she majored in Neuroscience, graduating Suma Cum Laud, and moved back to Boston to pursue a medical career. Beginning in 2006, while living in Boston Megan became an EMT and Paramedic at Lyons Ambulance Service in Danvers, MA. One of her favorite places was the Wongchhu Sherpa Memorial Hospital in Khamdig, Nepal, while working for Global Rescue, Inc. She loved the mission, the atmosphere, and the culture of Nepal, and often spoke of it fondly. These mission trips included helping injured people in Germany, Switzerland, and Thailand. Megan’s professional interests propelled her forward to attending Massachusetts General Hospital’s Physicians Assistant School in Charlestown, MA during which she did clinicals at the Navajo Indian Reservation, Oklahoma, and Mount Everest Base Camp (High Altitude Medicine) and others. While living in Maine, Megan worked as a P.A. in the trauma unit at Maine Medical in Portland. Always a passionate individual, Megan embraced every undertaking with nothing less than all of herself. She was never afraid of starting a new project (although sometimes she did not finish them), pursuing a novel interest or hobby or making a friend. These varied interest included skiing, hiking, camping, sailing, mountain biking, four-wheeling, adventure travel, meditation, yoga, naturopathic and holistic nutrition, ice and rock climbing and art of all kinds.
If you were lucky enough to have been a friend of Megan’s one of the few people who knew her very well, you know that she fiercely protective of those she loved. She was a loyal, steadfast friend. She had many acquaintances, but only let a select few know her inner self. Always compassionate, maybe to a fault, Megan was the first person to show up and the last to leave. She remembered the minute things going on in others lives and would always send a text or make a quick phone call to reach out and let them know that she was thinking of them. In a second, she would show up with a small gift to brighten someone’s day – flowers, a favorite meal, book or just an offer for a walk and a listening ear. This same compassion and empathy were also extended to the very luck folks who Megan cared for as an EMT, a Paramedic, and a PA-C. She treated each person she cared for as she would want to be treated, always involving their family, honoring their autonomy, and practicing with clinical excellence. If there was any regret she had, it was being unable to provide idealistic care she often wanted to with a stressed and broken healthcare system. Megan understood meditation, candlelight, and Native American drumming. She brought prayer flags from Mount Everest and a small jar of honey to share with our family. Megan’s heart was full of love, and we will ever treasure her life and many acts of kindness shared. Megan is lovingly survived by her father Albert Rand, brother Albert, Jr. uncle Charlie Rand, and several cousins: also, her husband Eric Moore and his two children. She was predeceased by her mother Nancy. A service of remembrance and celebration of Megan’s life will be held on Saturday, February 12, 2022 at 12:00 p.m. at the Alfred Parish Church, 12 Kennebunk Road, in Alfred, ME. Immediately following the service, you are welcome to a reception held at The Bistro in the village. Masks and social distancing will be followed. In lieu of flowers, memorial donations may be made to Hospice of Southern Maine, 390 US Route One, Scarborough, ME 04074-9925. The Autumn Green Funeral Home is respectfully handling arrangements.