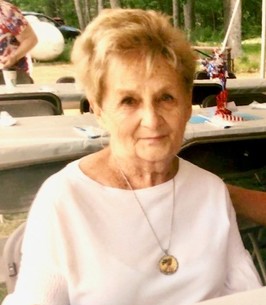 Joanne Mary Hapenney Drolette, 88, passed away November 11, 2022, at Pinnacle Health and Rehab in North Berwick after a short illness.

Joanne was born on February 3, 1934, in Waltham, Massachusetts, the daughter of Andrew “Red” and Ethel Ferrick Hapenney, and the much-loved little sister of Jack Hapenney.

Joanne graduated from Waltham HS, Class of 1951 and soon married Kenneth Drolette of Belmont, MA. Their son Kenny was born in 1952, followed by Robby in 1957 and Andrea in 1964. Joanne and Ken lived in Framingham, MA until 1981 when they made their home in West Stewartstown, NH. Joanne worked as the office manager for Brooks Chevrolet in Colebrook NH, and also enjoyed her time as a server at the Balsams Resort.

Joanne and Kenny moved to Keywood Manor in Alfred, ME in 1999 to be closer to family and where they made many friends.

In her “retirement” Joanne enjoyed her work with Meals on Wheels putting many, many miles on her car delivering meals all over York County. She also enjoyed shopping, yoga and coffee get togethers with her neighbors at Keywood.

Joanne was a voracious reader, (her favorite author was Stephen King!) a wonderful hostess and had a wicked sense of humor. There was always great food and much laughter at family get-togethers! She has been described by family and friends as a “gem”, the “nicest person they’ve ever met”, the “Queen Mum” and the “GOAT” of mums and grammies.

Joanne was predeceased by her parents, brother Jack, and husband Ken. She is survived by her daughter Andrea Berry of Alfred, son Robby Drolette of Wareham, MA, son Kenny Drolette and wife Patty, granddaughter Katie Cabral and husband Nuno all of Taunton, MA, her granddaughter Chelsea Berry and husband Garrison Nein of Saco, niece and “second daughter” Susan Hapenney of Standish, Jim and Edie Drolette of Burlington, MA, and many Drolette nieces and nephews.

A Celebration of Life for Joanne Drolette will be held in the spring of 2023.